Faster and Easier inside Excel 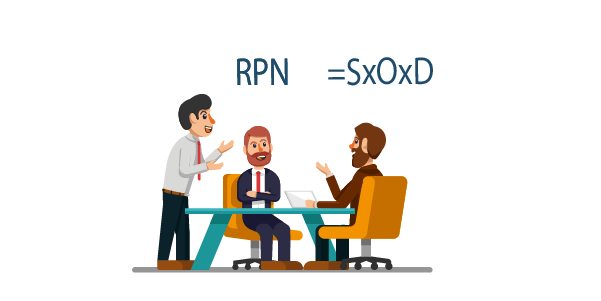 FMEA RPN was evaluated and actions were implemented but problems still happen. You might not address the high risks.

So how to prioritize the risk effectively right inside Excel?

FMEA RPN (Risk Priority Number) is a numerical assessment of the risk priority level of a failure mode in an FMEA analysis. FMEA RPN helps the responsible team/individual to prioritize risks and make the decision on the corrective actions.

2. How to calculate the Risk Priority Number?

Example: from the Process FMEA analysis of a painting process, the RPN is 120 for failure mode of foreign body in the painting layer.

To quickly calculate RPN for all failure modes right inside Excel, use the auto risk evaluation inside FMEA Analysis,

RPN is not the only risk assessment number used with FMEA. Some companies use other indexes to assess risks, such as the Critical Number (CN) or Severity-Occurrence-Detection (SOD). However, they are rarely used.

Although Failure Mode 1 has a higher SOD than Failure Mode 2, it has lower risk because its potential for occurrence is small and the possibility of detection is high (if it happens).

Thus, the disadvantage of SOD is that severity has a more critical role than Occurrence and Detection in the SOD equation.

3. How to evaluate Risk Priority Number?

The RPN can be used to prioritize high-risk issues and determine the requirement for corrective action. After calculation, most companies prioritize risks from the highest to the lowest RPN.

The team can use the Risk Priority Number to prioritize and reduce risks in the two following methods:

Many organizations use an RPN limit to determine which failure mode requires corrective action and which risks are acceptable. The RPN threshold is easy to use.

However, using an RPN threshold may cause team members to spend excessive time trying to reduce the Detection, Occurrence, and Severity rankings for lowering the RPN. This situation sometimes places the organization and its customers in danger.

The other organizations may address the corrective action for the top RPNs. After that, the team reset and find another top RPNs for the next improvement process. This method promotes continuous improvement.

The two ways above are based only on the comparison between the RPN of failure modes. The comparison based on the RPN may not reflect the actual risk. A high RPN failure does not necessarily indicate a high risk for the process or product. Moreover, two failure modes with the same RPN value may not have the same risk level.

In the following example from the automotive industry, Failure Mode 1 should be provided a higher priority than Failure Mode 2 although they have the same RPN value because it has higher Severity value.

However, because they have the same RPN value, an inappropriate action plan for critical failure may be selected. For this reason, the RPN should not be the only index used to evaluate the risk of each failure mode. The team should also use Severity, Occurrence, and Detection of prioritizing risks.

5. How to evaluate the Risk Priority Number effectively?

5.1 Risk evaluation using the FMEA RPN with the consideration of the S, O, and D rankings

Along with RPN, the team should consider the S, O, and D rankings for prioritizing risks one by one through team discussion. However, the team will be overloaded if there are too many failure modes in the FMEA.

The following example of a risk matrix includes a combination of severity and occurrence.

Note:
The team can use a three-dimensional matrix of Severity, Occurrence, and Detection, however, this kind of risk matrix is complicated to use.

The organization can create a matrix depending on their process characteristics and available resources. However, the team should apply the criteria consistently.

Using the RPN in FMEA is the most common and convenient method of evaluating risk because the FMEA RPN is easy to understand, whereas the entire FMEA methodology is complicated.

However, using only the RPN to determine the failure mode that requires corrective action can cause severe quality problems in an organization.

Companies that wish to avoid the limitations of the RPN should evaluate risk with a combination of indices, such as Severity, Occurrence, and Detection. 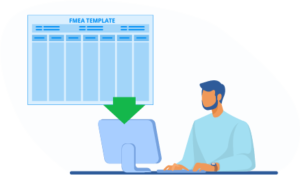 Looking for a free FMEA template that can help you conduct a failure mode and effects analysis easier and faster right inside Excel. You’re in

And get the lastest news and supporting articles

An email with download link and installation instruction will be send to your email address in a minute.